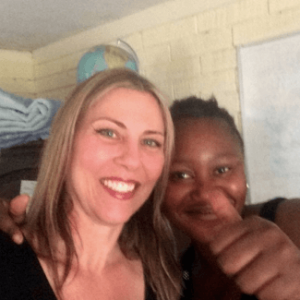 This powerful and true story of compassion was written by Colette Fitzgerald. An imprisoned refugee asked Colette about her Compassion It wristband, and no one could have predicted what happened next.

I live in Austin, Texas, about 25 miles away from a Federal Detention Center. The detention center is like a prison for women from all over the world who come to the United States seeking asylum. Many flee the extreme violence in Central America, and others escape war and eminent death in Africa. The U.S. government detains the women while it processes their cases which can take months or even years.

I visit the women at the center once a week as a volunteer, and I have formed a special bond with Yesenia from El Salvador. She has been detained for over nine months. She has suffered from depression and loneliness, and she desperately misses her family.

Recently, Yesenia asked me about my Compassion It wristband. I explained that the wristband reminds me to take compassionate actions on a daily basis. This means I may help someone in need, I may show kindness to someone, or I may do something thoughtful. She loved it and asked if I could get a wristband for her. On my next visit, I brought her one.

A few days after this visit, Yesenia emailed me with an urgent message. She shared that her Compassion It wristband had inspired her to talk with two distraught women who had recently arrived from Africa. Ines from Angola speaks Portuguese, and Denise from Congo  speaks French. Yesenia speaks Spanish, so the women had a tricky time communicating.

Despite the language barrier, Yesenia discovered that the women could be released without paying a bond, but they had nowhere else to live. She remembered that I had told her about Casa Marianella – a shelter in Austin for refugees and recent immigrants. She asked me to see if Casa Marianella had space for these two women. I did so immediately, and found out the shelter, indeed, had two open beds. I worked with Yesenia to get the information needed from Ines and Denise, and then Casa Marianella sent the required letters of support to the detention center. Within one week, the detention center released Ines and Denise.

Yesenia told me they came running over to her room at 6am, screaming from excitement that they were getting out. They had tears of joy streaming down their faces, and Yesenia began to cry, too. She felt so happy that she had made such a profound, positive impact on their lives.

Denise and Ines are now happily living at Casa Marianella. Although they don’t know what the future holds, they no longer live in a prison. I went to visit them at Casa Marianella, Because of the hope and life in their eyes, they looked like different women. They asked me for Compassion It wristbands in order to always remember the compassion shown to them. They intend to pass it on by helping others.

The next time I went to visit Yesenia, she was so excited by what she had achieved as a result of wearing her Compassion It wristband and by simply taking action to help another human being. She was inspired to keep it up. We decided together that we would make this our purpose: we would keep helping women like Ines & Denise find shelter. We are now working on several other cases, and we hope to have many more success stories to share.

Yesenia escaped extreme violence, poverty, rape, and death threats in El Salvador. She nearly died of dehydration and endured sexual assaults and  as she made the long, dangerous journey to the U.S. border. She is now imprisoned in the United States despite committing no crime. After all of that, she still has the compassion in her heart to help others who are suffering.

When I gave Yesenia the Compassion It wristband, she had been going through a pretty serious bout of hopelessness and despair. I noticed a change in her attitude immediately once she put it on and realized she is not powerless. She realized she has the power to make a positive difference in the lives of others, just like we all do. Now she lives every day with purpose and desire to help every woman she possibly can. Yesenia inspires me.

One day Yesenia will also be free. She will either be deported back to El Salvador or granted asylum here in the United States. We hope to have a decision from the judge by the end of 2017. Until then, we will continue with our purpose of taking compassionate action to help other detainees. If Yesenia can do it, we can ALL do it.

I have now seen firsthand that even in the direst circumstances, the compassionate human spirit can still flourish. We all have the power to make the world a better place.